The game of Jenga, as its know today, has been around since the 1970s. It has since become one of the most popular games of all time and can be played by people of all ages and cultures! Do you know how it was created and how it got its name? These are just some of the ‘fun facts’ we’ll discover in this article, so if you want to know more, keep reading to find out!

There are many interesting facts connected to the game of Jenga. These are directly related to the game’s creator, origin, design, and premise. We will discuss twenty of these facts (in this article) in more detail below.

So, let’s dive right in and explore each one further…

These are 20 interesting facts about Jenga.

Table of Contents show
1. It was created by a Young Woman.
2. It Originated in Africa.
3. Jenga is a Real Word.
4. Intentional Block Imperfections.
5. Precisely 54 Blocks.
6. Record-Breaking Heights.
7. The Bigger, the Better.
8. Great for Teaching Structural Engineering.
9. One of the Most Popular Games World-Wide.
10. Not Just a Hands-On Game Anymore.
11. A Great Teaching Communication Skills to Youngsters.
12. Involves Strategy to Win.
13. Not a ‘Board’ Game.
14. Similar to another Game Called Ta-Ka-Radi.
15. Often Used by Teachers in the Classroom.
16. Helps Promote Manual Dexterity.
17. Helps Promote Hand-Eye Coordination.
18. Can be played by Anyone, Anytime, Anywhere.
19. Two Hands Not Allowed.
20. Can be turned into a Do-It-Yourself Hobby.
In sum,

1. It was created by a Young Woman.

The game of Jenga was created by a woman named Leslie Scott when she was just a young girl! She was born in 1955 and launched the game at the London Toy Fair back in 1983. She played the game with her family as a child growing up in Tanzania.

2.It Originated in Africa.

Jenga originated in West Africa in the 1970s. Leslie Scott (now famous board game creator and co-founder of Oxford Games Ltd.) and her family used wooden blocks from a local sawmill in Ghana to play a ‘stacking’ game. It was introduced to the public over a decade later after Scott realized it had the potential to appeal to people of all ages and cultures.

The word Jenga is not made-up! It comes from the Swahili word ‘’ meaning ‘to build.’ It was shortened to ‘Jenga’ and chosen for its African origin and tower-building premise. That’s interesting!

The blocks used in Jenga are not exactly the same! To make the game more interesting (and challenging), each block is slightly different. Some are smaller, others are thinner, and a few are lighter! These block imperfections were introduced when the mobile version of the game was designed.

When Scott created the original Jenga game, it used forty-eight wooden blocks. Later, she changed the number of block to fifty-four! When asked why she did this, responded by saying she didn’t know she just knew it would work!

The premise of the game is to build the tallest tower possible. The current record for the highest tower to date is forty complete levels with an additional two blocks on the forty-first level! This was set back in 1985 by a man named Robert Grebler.

The ‘biggest’ Jenga game to-date was played using two CAT ‘diggers.’ The tower was stacked using twenty-seven wooden blocks that weighed roughly six hundred pounds each! Quite an amazing feat, when you stop to think about it!

Jenga is a wonderful game for teaching (and reinforcing) structural engineering concepts. These include earthquake forces, loads, foundations, rotational force, and tension/compression. Amazing to think that such a simple game can teach such complex principles based on science, in particular, Physics!

9. One of the Most Popular Games World-Wide.

Not surprisingly, Jenga is one of the most popular games in the world! It is third only to Monopoly and Scrabble, based on the number of units sold. Wow, that’s a really cool ‘fun fact’!

10. Not Just a Hands-On Game Anymore.

Jenga originated as a hands-on game using real wooden pieces. Now, it is also available as a mobile game and a video game. There are also other variations called Jenga Extreme and Jenga Ultimate.

Jenga is a great way for young children to develop their communication skills through ‘play therapy’! The rules of the game can be modified to encourage both social and emotional growth. It engages children in a fun game while simultaneously expanding their language and conversation skills.

Contrary to popular belief, winning the game of Jenga does require a certain amount of strategy. Players need to remove a block without toppling the tower, while at the same time, making the next move more difficult for their opponents. Making opposing players laugh or trying to ‘psych them out’ by commenting on the tower’s stability while attempting to move a block is called strategy, baby!

Jenga is not technically considered a ‘board’ game, even though it is often referred to as one. A board game you guessed it, a board (usually placed on top of a table) in which pieces moved around a pre-marked surface according to a specific set of rules. Jenga has no board or pawns, just wooden blocks!

14. Similar to another Game Called Ta-Ka-Radi.

Jenga is not the only wooden block game out there! Ta-Ka-Radi is very much like Jenga, in that it also originated in Africa and is often referred to as the ‘original’ wooden tower game. It predates Jenga and uses fifty wooden blocks instead of fifty-four.

15. Often Used by Teachers in the Classroom.

Manual dexterity is the capability to use your hands in a skillful way to manipulate objects through slow, precise movements. Jenga is the ultimate game to promote manual dexterity. It requires small finger manipulations in order to carefully remove a single block from one level and place it on top of another level, without causing the tower to crumble.

Hand-eye coordination is the ability to control hand and eye movements simultaneously. It is a vital skill for both children and adults and aids in the ability to grasp or pick up objects, button or unbutton shirts, playing an instrument, etc. Jenga is a great game to improve this basic fine motor skill.

18. Can be played by Anyone, Anytime, Anywhere.

Jenga is a great game to play on a rainy afternoon, while on a coffee break or between plane flights! All you need is the blocks and a flat surface. It is great for anyone ages six through sixty (and beyond) and transcends cultural and language barriers.

Did you know that you can only play Jenga with one hand at a time! Until I started doing research for this article, I had no idea! It’s true, you can use either your right or left hand, but not both! This is a game rule and must be followed.

20. Can be turned into a Do-It-Yourself Hobby.

I bet you didn’t know that people make their own Jenga game sets! Really, it’s true! I personally know someone who saws, sands and paints two-by-fours into life-size Jenga block sets and then sells them online! What a great gift idea for any Jenga enthusiast!

There are many ‘fun facts’ related to Jenga that you probably didn’t know before. After reading this article, you are now aware of these twenty (among other) interesting details, which hopefully will add to the game’s appeal and enjoyment. Now, it’s time to make the call, break out the blocks, and start building! Good luck to you, up-and-coming Jenga master! 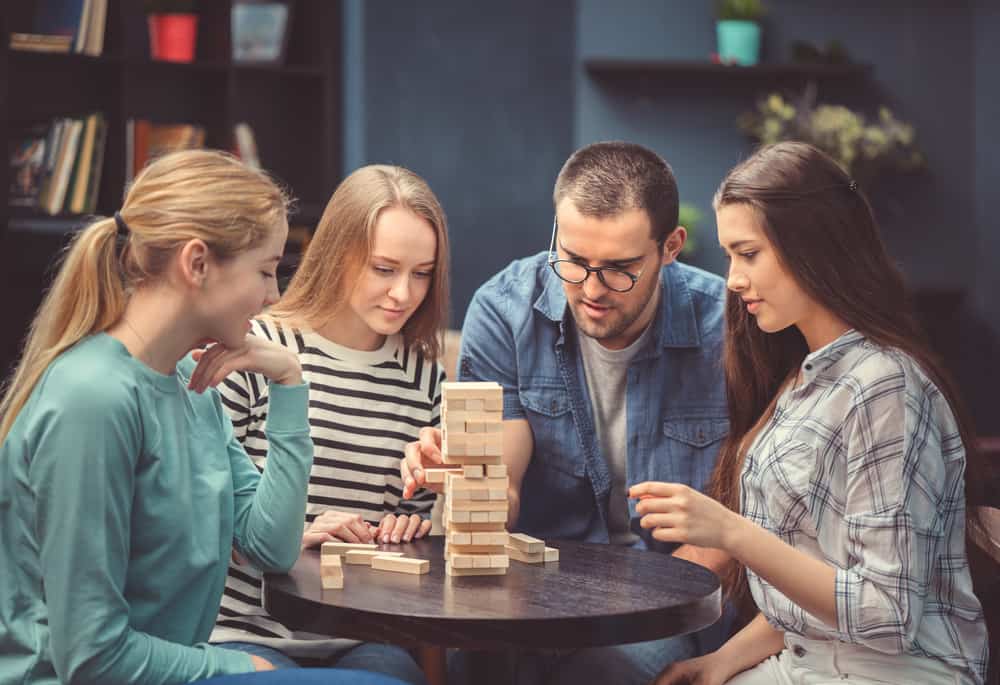