Over the many years that Checkers has been around, it has proven its worth by becoming a firm favorite for millions of board game enthusiasts. But where does this game of Checkers come from? How much do you really know about one of the world’s most favorite and oldest board games?

An Overview of the History of Checkers:

While the oldest known Checkers artifact unearthed in Iraq dates back to 3000 BC, the earliest known version of the game comes from a game called Alquerque, which was played in ancient Egypt in 1400 BC. After years of being played the Egyptian way, in 1100 AD, a Frenchman adapted it to be played on a Chessboard with 12 pieces per player.

Then, in 1756 an English mathematician created official rules for the game, and in 1840 was the start of the very first World Championships. Arthur Samuel then created a computerized Checkers program in 1952, which helped turn Checkers into the global phenomenon it is today. In 2007, the game was “solved” by a team of researchers from the University of Alberta (in Canada) led by Jonathan Schaeffer.

That being said, the history of Checkers is somewhat vague in that no one truly knows its exact origins. There are various ancient games that have a similar concept, and so the history of the game is not quite precise. If you want to learn a little more about the summarized version of the history Checkers mentioned above, read on.

Table of Contents show
First of All, What Is Checkers?
Checkers – The History
Checkers Dates Back to 3000 BC, or is it 1400 BC?
Checkers is Adapted by a Frenchman
Modifications: Crowning & Forced Jump
The Rules of Checkers are Made Official
Checkers Meets Computers And A.I.
Checkers Today
And Now You Know…

First of All, What Is Checkers?

Before you can start to look at the history of Checkers and how it has grown into the much-loved game it is today, it’s a good idea to know what it is. If you haven’t played Checkers before, here you go…

Checkers, which is also known as Draughts, is a strategy board game that involves diagonal moves of game pieces and capture of opponent’s pieces by jump moves. The game is played by two players with 12 pieces each. The name Draughts means “to draw” or “to move”. The main objective is to capture as many of the opponent’s pieces as possible until the opponent has no more potential moves. Also, another objective is to get to the opponent’s side of the board in order to crown their pieces king along the way.

The question of what time period Checkers comes from is the most difficult to answer. As already mentioned, some believe that Checkers is a lot older than the majority of the world has thought it to be. Checkers is an ancient game, we already know that, but what is unclear is just how ancient it is.

For quite some time, the world believed that Checkers was related to the game Alquerque, which is known to have been played in ancient Egypt in 1400 BC. This made the most sense. Alquerque was played on a 5×5 board with very similar rules to Checkers as we know it today. If this is what you have believed all along the way, perhaps it is time to change your mindset.

Archeologists have since found new evidence, while digging in an ancient city in Iraq called Ur, that point to Checkers dating back even further than 1400 BC. Here they found what seems like a Checkers game, only with a slightly different board. However, the name of the game and the rules are not known. And the carbon testing on the items date them to around 3000 BC. This could mean that Checkers is far older than we know.

While the actual age of Checkers is unclear, you can assume that it is as ancient as civilization itself.

Checkers is Adapted by a Frenchman

Over the years, Checkers underwent a variety of tweaks and changes – all before it was ever known as “Checkers”. These changes didn’t happen immediately or quickly, though. It all happened very gradually.

The Egyptian version of Checkers was obviously well received and enjoyed because it was played by many people for many years. In fact, the game remained unchanged for thousands of years, with its supporters growing steadily. It was only in 1100 AD that a Frenchman decided to adapt the game to be played on a Chessboard. This was the first change to the game in thousands of years! And that is not the only change he made. He also thought to increase the number of pieces that each player gets from 5 to 12.

This new version of Alquerque was now called Ferses (sometimes Fierges). At the time, women mostly played Checkers as a social game and it was therefore referred to as “Le Jeu Plaisant De Dames. While this version of the game was in action, there was no such thing as a forced jump.

*As mentioned in the book “Board and Table Games from Many Civilization” written by R.C. Bell.

By the 13th century, the rule of crowning was already used. As you might know, this meant that when a piece reached the farthest row on the opposite side, it became a king. Later on, in the 16th century, the forced jump was introduced, and then the game’s name was changed yet again to Jeu Force. The forced jump rule ensured that a player had to make the jump and take possession of the opponent’s piece if the opportunity presented itself. These two rules are still in place today.

During this time of changes and modifications, it became obvious that Checkers was a quite popular pastime.

The Rules of Checkers are Made Official

Checkers wasn’t really Checkers until the rules were determined and “set in stone” so to speak. As the game of Checkers (called by many other names by this point) grew in popularity, more people took a keen interest in it. More people were playing it and it was becoming something that many knew about.

Around the middle of the 1500s, it was common to see books written on the game. This continued until the 1750s when an English mathematician (William Payne) created official rules of Checkers in a treatise that he wrote. Once this was done, the game became known as Checkers in the United States of America, but was called (and still is) Draughts in the United Kingdom.

With actual rules in place and an official name, Checkers grew in popularity and was eagerly played by many. It became so popular that the first Checkers World Championship was held in 1840. It was around this time that people started paying more attention to the technicalities of the game and how strategy can be used to create an advantage. And that is possibly why the next phase in Checker’s history came about – computerized Checkers.

Nowadays, computerized Checkers games are so advanced that they can determine every possible move and outcome on the board. In fact, in 2007, a group of scientists (led by Jonathan Schaeffer) from the University of Alberta, in Canada, created a software that, with the help of machine learning, as well as A.I. (Artificial Intelligence) was able to “solved” the game of Checkers.

With that being said, Checkers’ computer programs have become so advanced that you might even have an app on your mobile phone…and you probably do!

The game of Checkers today is played for its many benefits. It is fun; it also develops brainpower, logical thinking, confidence, and strategy. Checkers can provide entertainment as well as cognitive development – which are a great combination, especially for kids. The game is enjoyed competitively, as well as just for entertainment in the private home.

While Checkers is a widely played game, its following is probably smaller than that of Chess. World Checkers Championships are held annually along with regular tournaments. It is unusual nowadays for someone to not know what Checkers is. Actually, some people prefer that their children learn Checkers before learning Chess, so that they can familiarize themselves with the type of logic and thought process involved in playing Checkers.

With Checkers’ popularity staying fairly constant over the years, it has been noticed that the most popular form is American Checkers. This is also often called English Draughts. This version is played on an 8×8 board. International Draughts is played on a 10×10 board. Which version of Checkers is played on a 12×12 board? That would be Malaysian Checkers, Singapore Checkers, and Canadian Checkers.

And Now You Know…

While Checkers might never match Chess in terms of popularity, complexity and strategy required, it is a great addition to your family games evening. Checkers games are the ideal way to relax, unwind, and keep the mind active at the same time. And the very next time you are playing a friendly game of Checkers, you can use your newly learned history knowledge of Checkers to entertain your opponent. Good luck and happy playing! 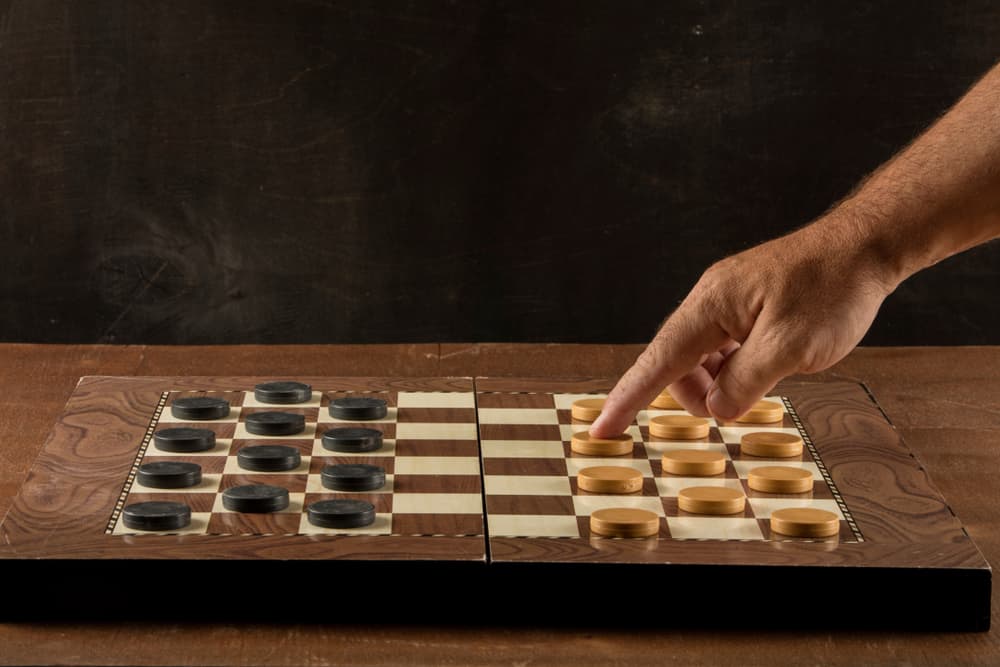