The game of Twister has been around for decades. It’s a quite popular game that is often played at parties and social gatherings. If you’re reading this is because you’re probably looking to increase your general knowledge about the game.

There are many interesting and fun facts about Twister. These include how it was created, who famously played it, what records were set around it, how the public perceived it, and how it is connected to other popular toys and games. In this article, we’ll take a closer look at 20 of them. We will discuss each point individually and in detail.

So, if you’re ready to learn all you know about Twister, then let’s get started…

These are 20 fun and interesting facts about the game Twister.

1. The Creator Had an A-Ha Moment.

The creator of the game Twister, Ron Guyer, was working in his father’s ad design office (trying to come up with an idea for how to promote shoe polish) when he suddenly had an idea, ‘what if there was a board game in which players acted as the pawns?’ This ‘a-ha’ moment is what started it all!

2. It Began as a Game of Tic-Tac-Toe Using Feet.

After his ‘a-ha’ moment, Guyer found a large piece of square-shaped wood to use as a board and got other employees at the office to play tic-tac-toe with their feet! He later enlisted the help of two well-known toy producers, Neil Rabens and Charles Foley, to refine the idea and the concept of “Twister’ the board game was born.

3. It Became One of the Most Popular Games Ever.

After Rabens and Foley were brought on-board, Twister quickly became one of the most popular board games in the 1960s and, to these days, it continues to sell online and at toy stores worldwide. Its unique nature caused a stir at that time, with enough innuendo to make many retailers second-guess whether or not to sell the game at all!

The game reached peak popularity on May 6, 1966, when Johnny Carson featured it on The Tonight Show. He agreed to play the game on-air with Eva Gabor, rescuing it from obscurity and making it one of the most talked-about games (and television episodes) of its time. By Christmas, it had become the ‘game of the year.’

5. 3M Originally Turned Down the Idea.

3M, known for its adhesive office supplies, attempted to diversify its line and branch out into the gaming market in the 1960s. Guyer already had a business relationship with the company and asked them to market ‘King’s Footsie’, a game whereby two players would attempt to line-up their feet in a way similar to ‘Connect Four’. However, as Guyer put it, ‘crawling around on a mat didn’t really fit their upscale plan’ so the idea was scrapped!

6. It Was Originally Known as ‘Pretzel’.

Rabens and Foley made changes to the game, thus allowing it to take shape and advance into the Twister we all know and love today! Foley added colored circles in rows of six which gave the mat a more organized look and allowed players to interact with one another. Rabens promoted the idea of using your hands as well as your feet to play. The two called the game ‘Pretzel’.

7. The Name Was Changed to ‘Twister’.

Unfortunately, at the time the game was about to be launched, ‘Pretzel’ was also the name of a toy dog currently on the market. And, in an attempt to avoid consumer confusion, the name of the game was changed to and marketed as ‘Twister’ instead. Apparently, Guyer was not on-board with this change. He felt the name would be associated with catastrophic tornadoes rather than a fun game to play with family and friends.

8. It Was Too ‘Sexy’ to Sell Publically.

Many retailers at the time thought the idea of using body parts as pawns and interacting physically with other players was too sexy and ‘in bad taste.’ Despite his reservations, Mel Taft (the head of development for the Milton Bradley Company) decided to launch the game anyway, seeing its huge potential for profit.

9. Cartoons Were Used on the Box.

In order to alleviate the sexual innuendo surrounding the game, Milton Bradley decided to use cartoon characters (rather than real people) on the cover of the box. This did not solve the problem, and top retailers such as Sears still refused to sell it in their stores, causing Milton Bradley to suspend production indefinitely.

Following its resurgence after The Tonight Show episode in 1966, more than 3 million copies had been sold by 1967. People apparently lined up 50 meters deep in front of the only store rumored to have any left in stock the day after Carson and Gabor made television history – the original Abercrombie and Fitch retail outlet, best known at the time for selling outdoor wear and sporting goods.

During the height of its popularity, other companies tried to capitalize on the success of Twister. In 1968, Parker Brothers launched a game called ‘Funny Bones’ that used a deck of cards instead of players. The object was to hold the oversized cards between body parts without letting it fall to the ground. Guyer didn’t seem bothered by this at all, stating, ‘imitation is the highest form of flattery.’

There was a time when it became a novelty to play Twister at parties in the nude. The press reported that people would participate in the game naked, which fueled some negative publicity initially. However, it eventually all blew-over and the reluctance of buyers to purchase the game dwindled.

At the peak of its popularity, Milton Bradley was able to successfully market the game in many countries around the world except for Germany. According to Taft, the country at the time frowned upon the idea of women removing their shoes in public and thus shunned the game nationally.

14. It Has Been Modified for the Blind.

The National Federation for the Blind adapted the game to suit those with visual impairments. It circulated instructions in Braille on how to play using different textures for specific colored circles in the game, allowing players to ‘feel’ their way across the mat.

In 2015, a country singer named Thomas Rhett set a new Twister world record by revealing the largest ever Twister board at a concert appearance in Texas. It was laid out at the AT&T Stadium and consisted of 1200 standard-sized Twister mats put together for form one, massive 27,159 square-foot playing surface!

In 1987, a group of students from the University of Massachusetts set a Twister world record for the most participants at a single event. Contortionists numbering 4,160 were assembled to play the game.

17. Love Connections Were Made By Playing the Game.

Apparently playing the game with others you find attractive has led to relationships (and even marriages) over the years! Guyer has stated that he’s been told of a number of incidents in the past in which people have gotten together after developing romantic feelings through the casual, physical contact experienced while playing the game.

18. It Has a Close, Personal Connection to NERF.

Twister would not exist today without its creator, Ron Guyer. For as popular as the game is, it is not Guyer’s most famous or profitable invention. Shortly after the game launched in 1966, Guyer began working a game based on the idea of throwing foam balls between players. This concept was refined and eventually sold to Parker Brothers, who marketed the brand as NERF.

19. You Can Win the Game Using Strategy.

The game of Twister can be won using strategy, similar to other board games. Such tactics as forcing your opponents to the edge or spreading out across the board to limit the easy-to-reach options are key strategy maneuvers often used by experienced Twister players.

The game of Twister is a physical one, requiring players to contort their bodies into a number of different shapes while holding challenging poses. It is often used in schools by Gym teachers to develop various areas of physical fitness, including coordination, balance, and non-locomotor movements.

The game of Twister has a vast and interesting history, making it the exciting and fun game it is today. So why not get your friends and family together for a challenging, yet amusing game of Twister tonight. It is bound to make you laugh and ‘tie you up in knots!’ 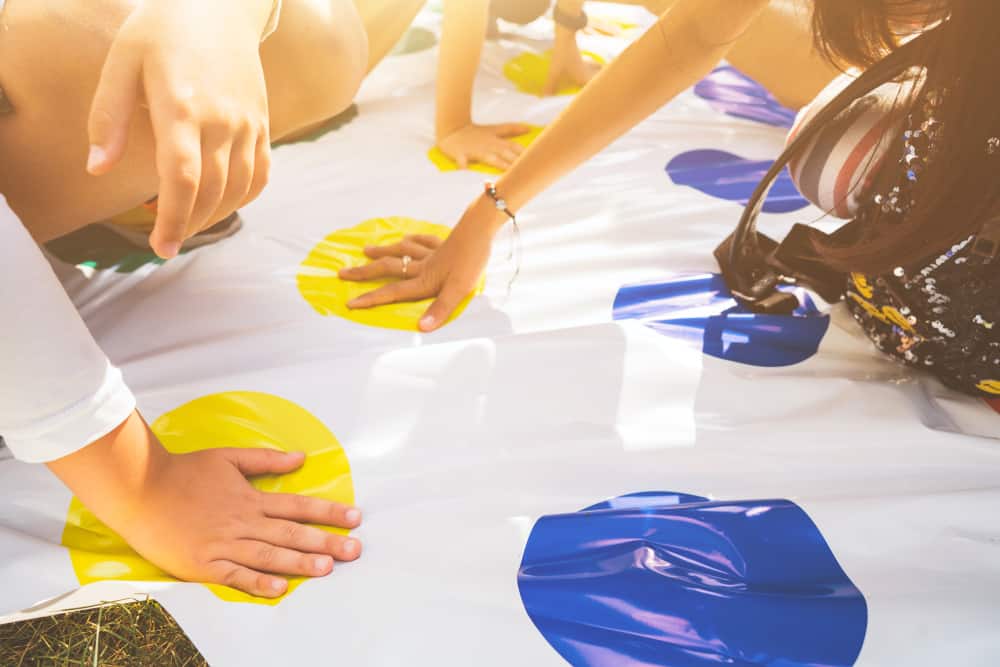 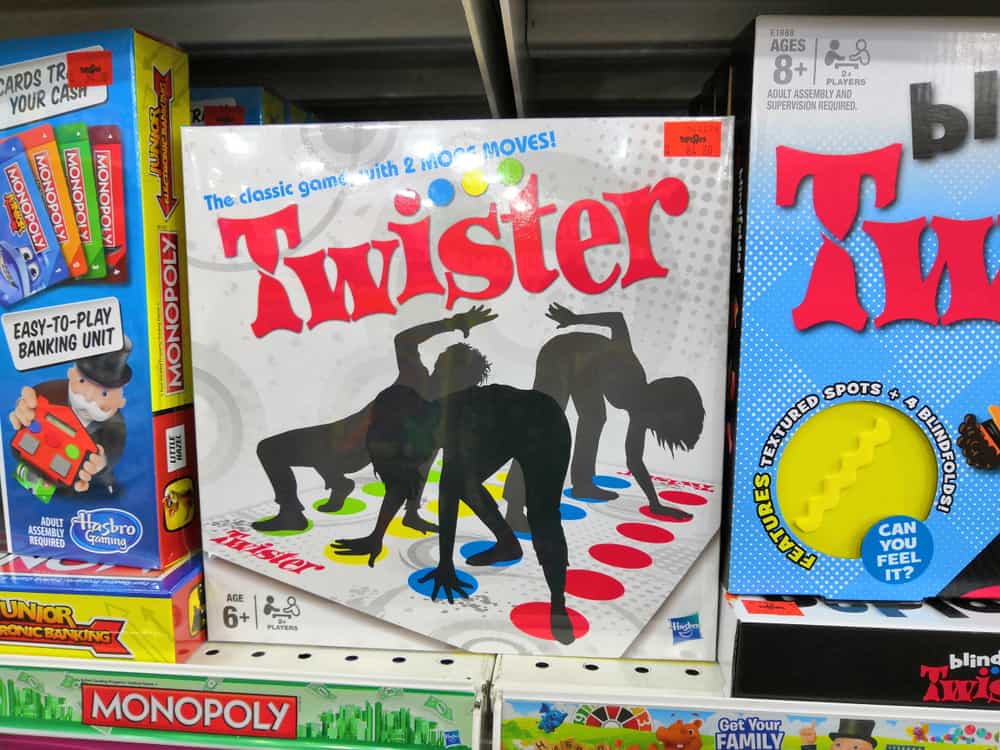