The game of Twister became an overnight success back in May of 1966 when Eva Gabor played it with Johnny Carson live on The Tonight Show! This game, which markets itself as ‘the game that ties you up in knots!’, has since grown into a popular party game. Yet, over the years, there’s been some controversy on whether it should be considered a board game; so, today, we’ll try to shed some light into the discussion.

Is Twister a board game? Yes. A board game is defined as a game played on a board that involves the movement of pieces across the surface. Twister uses a board, of sorts – the mat. The ‘pieces’ are the players, maneuvering their body parts across the ‘board’.

Board games often use ‘dice’ to introduce randomness and control the flow of the game. Twister uses a ‘spinner’ like dice to determine (randomly) how a player moves across the board (or mat) on any given turn.

Now, that you know Twister is indeed considered a board game, let’s explore this idea in more detail. We will discuss what type of game it is, what the board (or mat) is made of, how big the board (or mat) is and how it fits into the category of ‘board game’. Also, we’ll look at a few ‘fun facts’ such as who invented the game, when it was invented, what its original name was, as well as, a quick guide on how to make a Twister board (mat).

So, if you’re ready to learn all you need to know about the game of Twister, then let’s get started!

Table of Contents show
What Kind of Game is Twister?
How Big Is a Twister ‘Board’?
What are the Components of a Board Game?
Game Board
Playing Pieces
Dice
Turn-Based
Game Box (Container)
Rules Manual
Uses Strategy to Win
For Entertainment
When was Twister Invented?
What was Twister’s Original Name?
How to Make a Twister ‘Board’ (or Mat)?
Supplies/Materials
Instructions/Directions
In conclusion

What Kind of Game is Twister?

Twister is a type of board game that is also considered to be a party game. It is a game of physical skill that is played on a large plastic ‘board’ or mat that is spread out across a flat surface such as the floor or ground. The ‘board’ or mat is printed with 6 large colored circles (red, yellow, blue or green) in each row.

The ‘spinner’ acts like dice and is used to determine how a player moves across the mat. It is divided into four sections, which include ‘left foot’, ‘right foot’, ‘left hand’ and ‘right hand’. Each of the four sections is further divided into color categories, including red, yellow, blue, and green.

After spinning, the referee calls out the randomly-selected color combinations such as ‘left foot red’ and the players must then move their left foot onto a red circle. The game continues on in this manner until a player cannot achieve a specific color/body part combination and either forfeits a turn or falls, leaving the player last standing as the winner.

How Big Is a Twister ‘Board’?

A traditional Twister ‘board’ or mat is approximately 67 inches by 55 inches. It comes in a factory-made box that 10.5 by 10.5 by 2 inches in diameter. Each spot or circle on the board is about 7 inches around.

What are the Components of a Board Game?

A board game contains certain components that set it apart from other types of games. Let’s take a look at each of these in more detail and see how the game of Twister relates. The specific components of a board game include the following:

As the name suggests, a board game is a game played on a board (or a marked surface) on which pawns are moved or placed according to a set of pre-determined rules. The game of Twister uses a mat placed on a flat surface that is marked with circles of different colors. The rules of Twister govern how the game is played.

Board games often use playing pieces that move around the board. In the game of Twister, the pieces are the people playing! They move their bodies (hands and feet in particular) around the mat according to the referee instructions based on what the spinner randomly chooses.

Dice is often a main component in board games. Dice affect the flow (as well as the outcome) of a game in a random fashion. Twister uses a spinner (which acts like dice) to determine the random actions or movement of the pawns (or people) around the board (or mat).

Most board games are turn-based, meaning the players make strategic or random moves one at a time, continuing in this fashion until a winner is determined. Twister is also turn-based in which players move across the mat (or board) one at a time as directed by the referee based on the random result of the spinner.

Board games almost always come in a box or container. Twister comes in its own factory-made box with the marketing slogan ‘‘the game that ties you up in knots’ printed on top. The image printed on the box has changed throughout the years but generally shows figures in a variety of ‘Twister’ poses.

Most board games contain a manual or set of rules that explain how to play and win the game. Twister is no different. It comes with its own unique set of game rules including how to set-up, play, and win the game. For more information, check out my other article entitled: The Official Rules of the Game of Twister (With Pictures).

Many board games rely on strategy to win. Twister uses certain forms of strategy as well, including crowding your opponent to the edge of the mat to reduce the number of circles he or she can easily reach. To find more about Twister strategy, check out the section “How to win the game” on my other article called: The Official Rules of the Game of Twister (With Pictures).

Board games are played for fun and entertainment. So is Twister! It is the ideal party game and helps build social and communication skills as well. It is so hilarious watching your opponents (and yourself) try to twist and bend (like a pretzel) when playing the game!

When was Twister Invented?

The game of Twister was invented in April of 1966 by two men named Charles Foley and Neil Rabens. It was the very first of its kind, using body parts as playing pieces or pawns in a game. The Milton Bradley Company took an interest in the game and bought the rights, releasing it (as their own) within a year and taking credit for it.

What was Twister’s Original Name?

The game of Twister was originally known as “Pretzel’. When Foley and Rabens sold the game and its marketing rights to the Milton Bradley Company, they renamed it ‘Twister’.

Making your very own Twister board (or mat) is an easy DIY project you can do in a day. It is affordable, fun, and will add hours of enjoyment to your next social gathering. The necessary supplies and instructions include the following:

If you don’t already have a game spinner, you can make one. Simply cut out a circle on white paper, divide it into four sections labeled ‘left foot’, ‘right foot’, left hand’ and ‘right hand’. Divide each section again into another four sections and color one red, one blue, one yellow and one green. Attach this circle to a cardboard base of the same size and shape. Attach a paper clip to the center with brad fastener, and voila, you’re ready to play!

The game of Twister is a type of board or party game which follows many of the same principles associated with classic board games, making it both entertaining and challenging. It was invented over 50 years ago and is often played at social gatherings and family get-togethers.

Why not invite your friends and family over for a fun game of Twister tonight. It is sure to ‘tie you up in knots!’ Good luck! 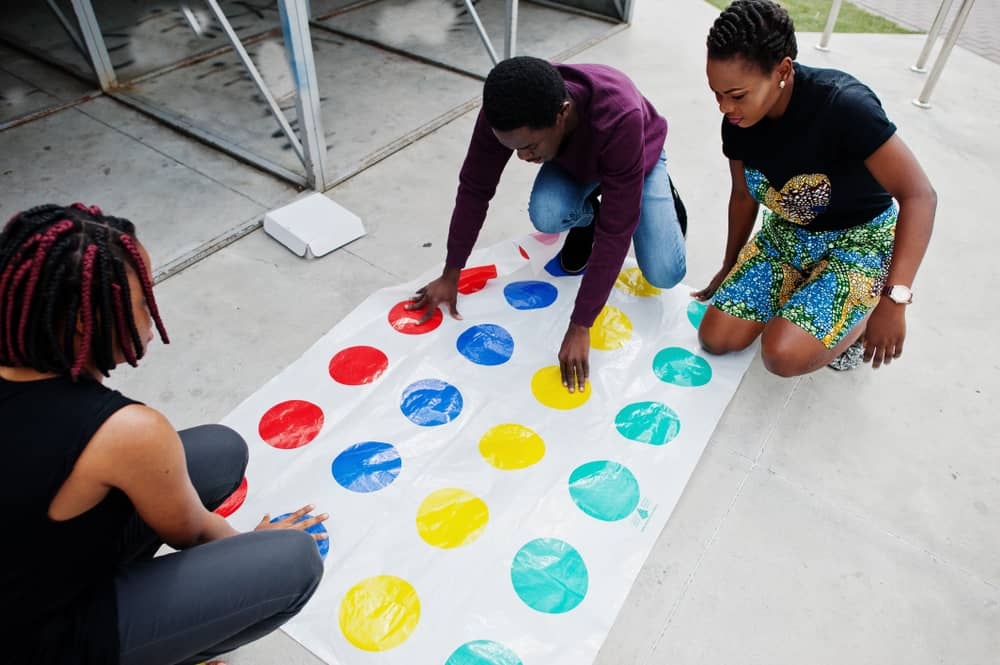