Jenga is a fun game of both physical and mental skill based on the simple idea of moving and stacking wooden blocks in a tower. It appeals to people of all ages and cultures and is so much fun to play. While you may be familiar with the classic Jenga game, you may not know that a really big version also exists called Giant Jenga. Right now, you may be wondering to yourself, ‘what is Giant Jenga’?

There are even other versions of Giant Jenga that can reach higher heights. For instance, with the Jenga Giant Premium Hardwood Booster Pack, the tower can reach a height of 5’ or more. Can you imagine?

How to Play Giant Jenga

Giant Jenga is just like classic Jenga, only much bigger! It includes 54 precisely cut, high-quality wooden blocks that are pre-polished and very durable. The dimensions of the blocks are roughly 1x2x6”. Two or more people ages 10 years and over can play this game.

The rules are the same as classic Jenga and include the following:

To begin playing Giant Jenga, use the following eight steps:

Where to Buy Giant Jenga

Giant Jenga can be purchased easily through online toy and game stores as well as Amazon.com. Best of all, you can have it delivered in as little as 1 day right to your front door! You can also look into the Giant Jenga Premium Hardware Booster Pack (or other Jenga game variations) online as well.

Where to Play Giant Jenga

Giant Jenga is the perfect backyard summer game following a barbecue with family and friends! It is easily set up on the lawn, patio, deck, etc. Basically, any flat ground surface will work! Bring out the game at any social gathering, including wedding receptions, family reunions, birthday parties, anniversaries, and graduation celebrations. It can even be played indoors (in the basement or in the garage) as well.

Leslie Scott is the creator of Jenga, which is the basis for all other Jenga game variations including Giant Jenga. She launched the game back in 1982 in London. She sold the rights to Robert Grebler, who subsequently launched the game in North America in 1987. It has since become an international icon, appealing to people of all ages and cultures.

How to Make Giant Jenga

It’s easy to make your own Giant Jenga set (with base), all you need are some new (or recycled) wooden boards! First things first, gather your supplies and tools, which include the following:

Now that you have the necessary tools and supplies, you’re ready to begin building your Giant Jenga set. The eight easy steps include the following:

Step One – Prepare Yourself

Before beginning, get prepared by having your tape measure, pencil, tools, and supplies handy. Put on your safety glasses and put in your earplugs. Make sure the work area is clear with good air flow.

Begin by marking and cutting the ¾ inch plywood to 18”x18” pieces using a circular or table saw. To make the frame, use 2×4 boards and cut 2 of the boards to 15” and another 2 to 18”, again using your saw. Attach the boards to each other (using screws and a drill kit) to make the platform base.

Using the 2×4 boards, cut 54 wooden pieces at 10 ½” each with a miter saw, if possible. Do this on a workbench or table or with a sawhorse setup. Set each board aside.

With your orbital sander, smooth out each wooden piece along the ends and sides. Use sandpaper to remove any imperfections or rough patches that may remain after sanding.

After sanding, you can finish the wooden pieces (with lacquer, varnish, stain or paint) and customize them to your liking. Be sure to let the blocks dry entirely.

Place the constructed platform on the ground and stack the pre-made wooden pieces in 3 rows, alternating the stacking direction for each level. Set-up the game in the backyard on the lawn or patio and gather your friends and family around it.

Now you’re ready to play. Follow the rules of the classic Jenga game (see above) and have fun! Be careful when removing the blocks as they are likely larger and heavier than what you may be used to!

After playing, store the base and wooden pieces in plastic totes or storage containers in the garage or in the basement. This will keep the pieces intact and protect them from damage.

Giant Jenga provides players with a ‘cool’ and exciting new way to enjoy the quintessential game. Now, all you need to do is get your family and friends together, break out those massive blocks, and start building! And don’t forget to yell ‘Jenga’ when the tower falls! Good luck (everyone) and have fun! 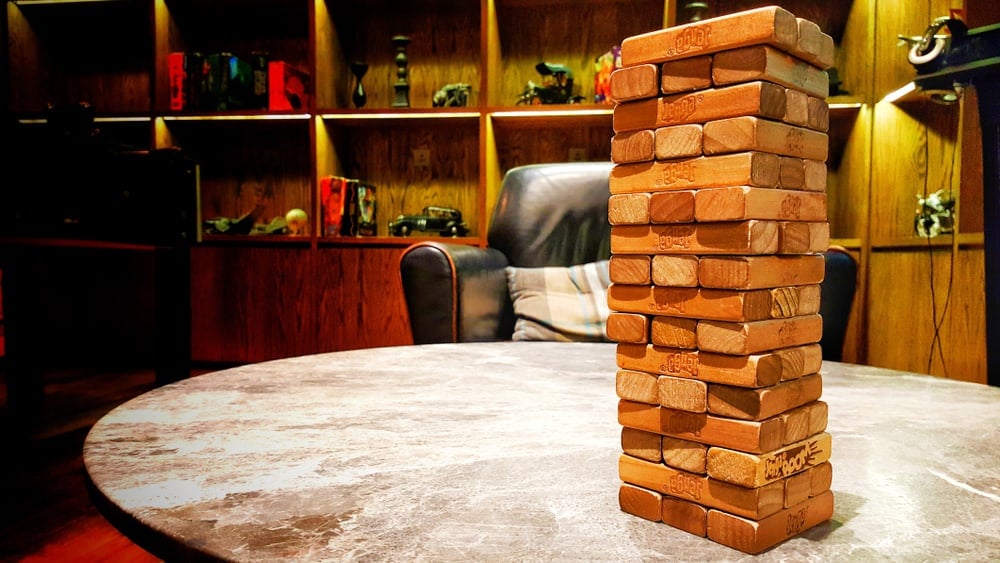